Paul Vandevelder is the Author of the Oregon Book Award winning:
Savages & Scoundrels: The Untold Story of America's Road to Empire through Indian Territory

He came to ProWorks with a unique challenge to create a web presence for the book and upcoming film. He had a vision of recreating Mt. Rushmore to replace the heads with the "Savages and Scoundrels" from his book. It was my task to bring his vision to life and I am happy to share that design process with you!

Here's how it started:

I'd like Sitting Bull to replace Washington, leave Jefferson as-is (because he's a 'Scoundrel'), replace Roosevelt with Andrew Jackson, and replace Lincoln with Red Cloud. Under the Monument have a logo that says 'Savages and Scoundrels', with a short description under that. This will be on the home page of the new website, and oh, by the way, make it awesome.

First of all, a photo of Mt. Rushmore to work with: 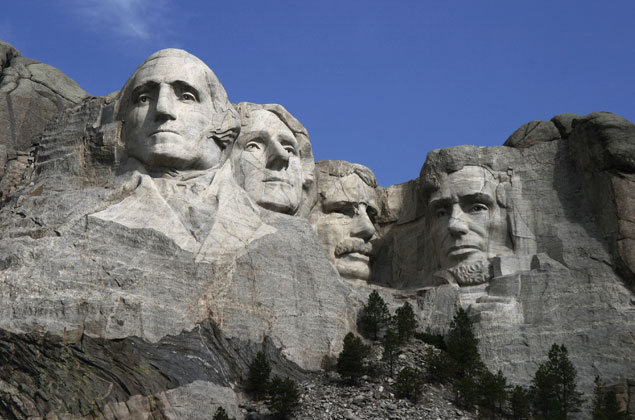 And here's a collection of head images I worked with. It was an arduous search for the heads at a correct angle to match those on the original Mt. Rushmore shot. I looked for sculptures because I would have a head start that way in matching the sculptures of the Monument. Special thanks to the creator of the final Sitting Bull sculpture and image: Tim Barnard~tecciztecatl http://tecciztecatl.deviantart.com/gallery and to the creator of the final Chief Joseph sculpture and image: Henry Alvarez~AlvarezWax http://alvarezwax.deviantart.com/gallery for their excellent work and allowing me to use the images. 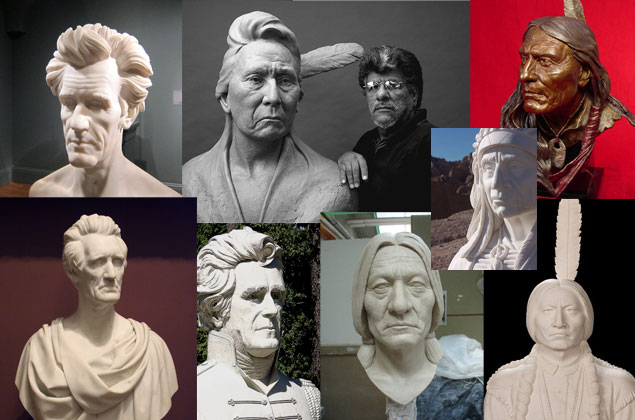 Knowing full well this first delivery to Paul was going to look horrible, I proceeded to build the first mockup to get the general idea across to make sure we're on the same page. I tried to at least get the gaze direction correct. 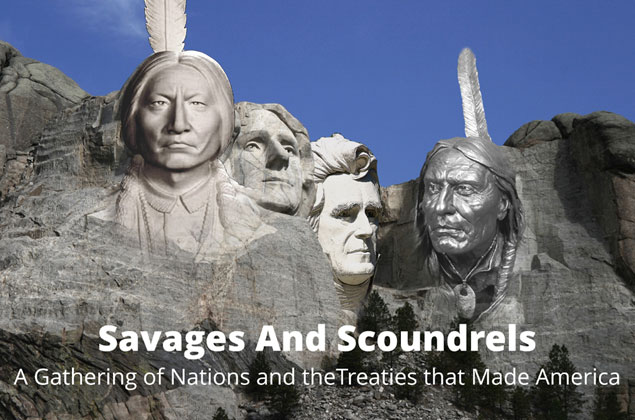 An earnest design attempt came shortly after the initial thumbs-up from Paul, and I concentrated on the Sitting Bull head (far left) getting the rock texture and color closer to a finished look. I also added Jackson. I discovered a new technique at this step using a "Displacement Map" to wrap my rock texture around the curvature of my sculpture image. A great tutorial here http://www.photoshopessentials.com/photo-effects/texture-map/ We also decided to ditch the feathers because they looked silly and unrealistic :) 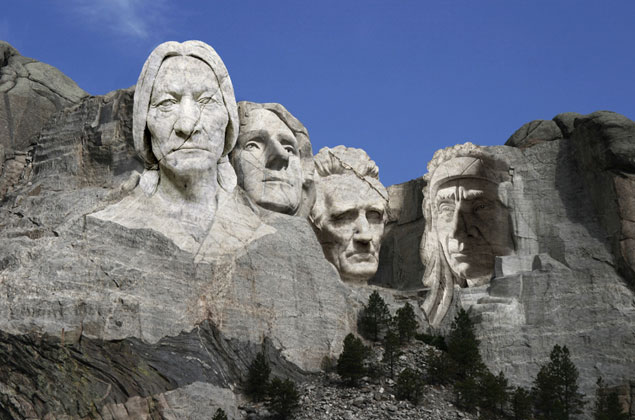 Red Cloud (far right) was becoming problematic for me. The two images I used up to this point weren't working out so we decided to drop him entirely and go with Chief Joseph. Further refinements were made to Sitting Bull and Jackson, using the original Jefferson between them as a guideline for color, lighting, and texture. 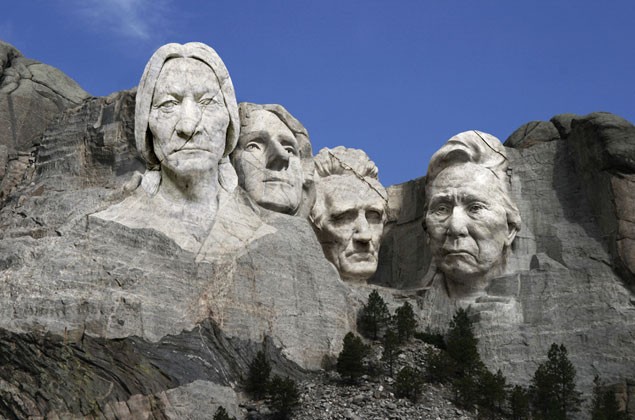 So I thought I'd get fancy and go with a new, younger Jackson image because...I don't know why, I just did, I thought he had cool hair. I had the other heads finished at this point. 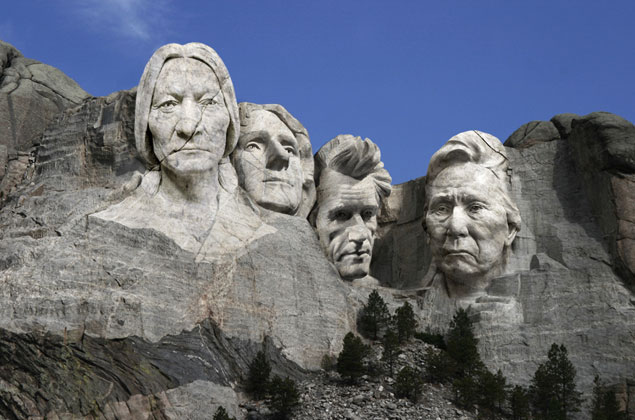 Right. My preppy Jackson and his "do" got dropped and I went back to my first "geezer" Jackson because that one fit the mood best anyhow. At this point I added the logo, which can be another process discussion in itself, but the revisions were all done by myself and this is the first of it that Paul saw. My goals were to seamlessly integrate "Savages" into the rock (representing Native Americans and thier literal foundation of the country) and to get a Wild-West feeling from "Scoundrels" (draped on top indicating thier later arrival). 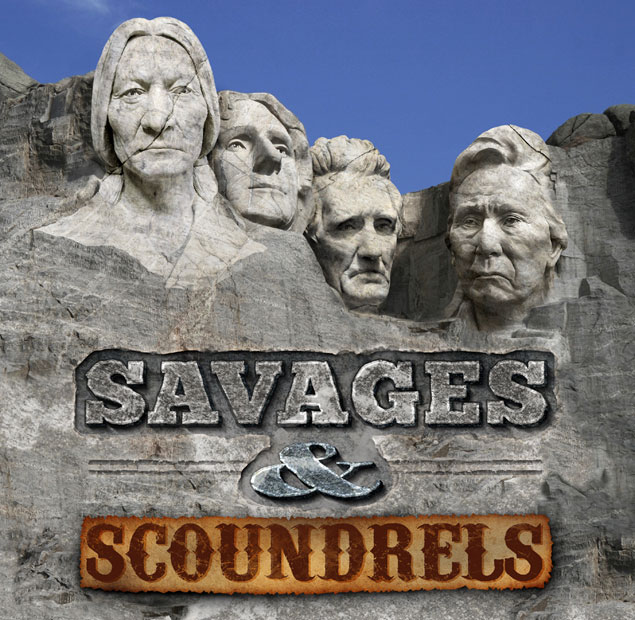 Now that the main Mt. Rushmore image was complete, it was time to put it all together for the home page of the new website. Here's my first attempt, with the subtitle text in a Wild-West brand look.

The branded sub text came off a bit cliché so I went with a more refined, integrated look for that below the logo. I extended the rock texture below by using the Clone tool in Photoshop. I also added the top navigation and sponsor area. 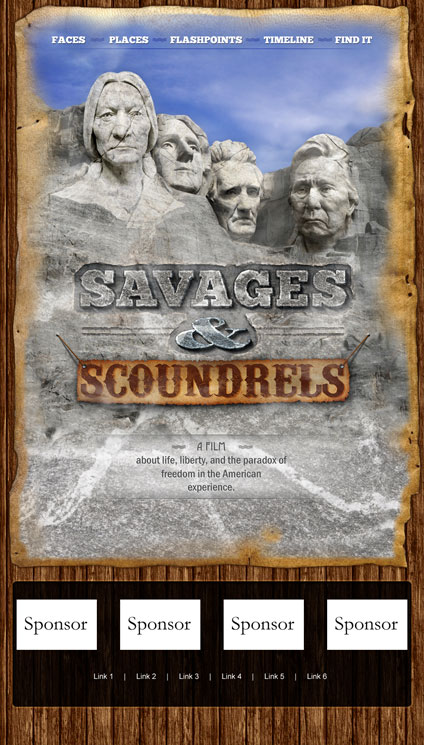 There were some concerns at this point about the logo and sub text being too low on the page. We were thinking users might come to the page and only see Mt. Rushmore. This was an attempt to remedy that by bringing the logo out of the image and placing it at the top. We also decided to recoup some space by placing the subtitle in the empty air above the heads on the right. 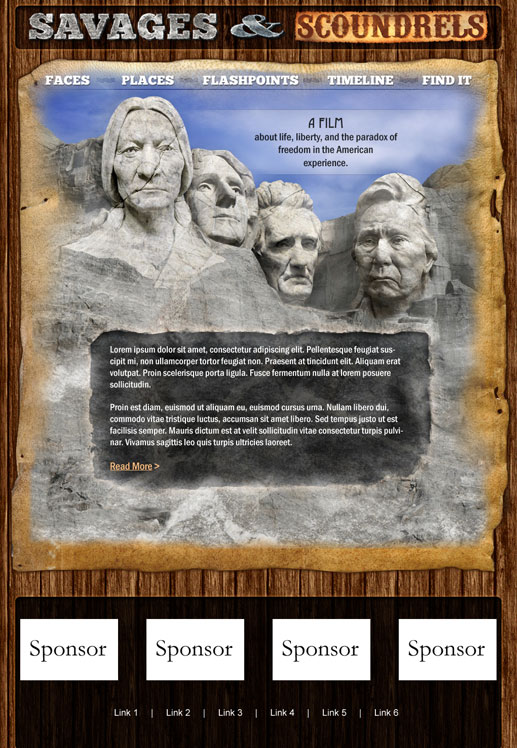 But that completely ruined this compelling logo I created before, being integrated with the rock and figures, so we decided to bring it back and just also have it say "Savages and Scoundrels" in the subtitle in the air. 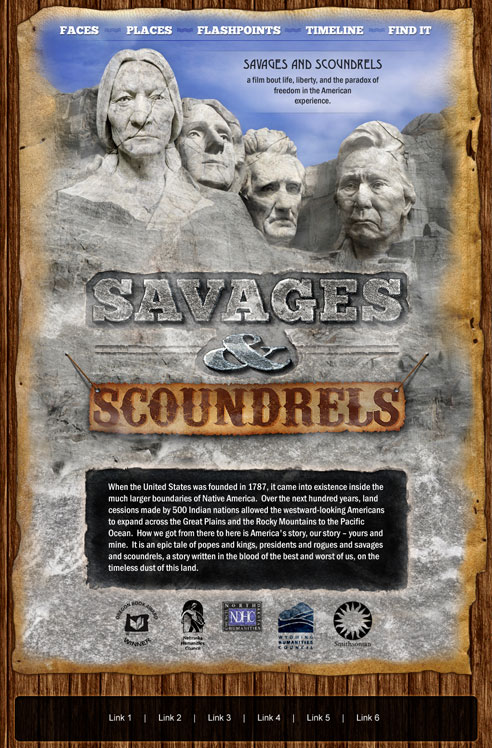 That was the winner right there! I went on to create the actual home page from this design. But not so fast! I needed to revise the design again, this time on-the-fly, and make a big button in place of the introduction text below. Paul had waaayy more to say that than little blurb so we had to give it it's own page :) 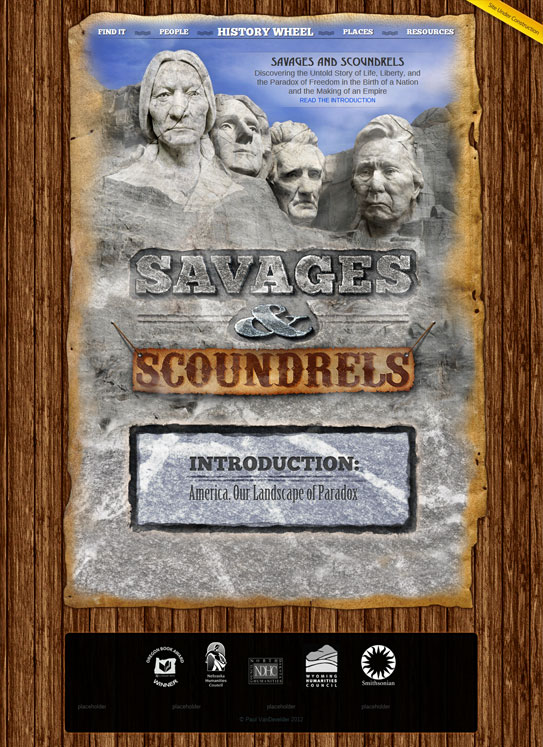 And that, ladies and gentlemen, is history in the making! The site itself is almost complete. We'll have another update when it's ready to show off. Thanks for following along and your comments are most welcome!