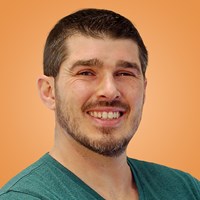 Every office has their own version of Ron Swanson - whiskey loving, facial hair of an Alaskan fisherman, gruff but sweet - and thankfully for us, we got Josh.

Josh had the good fortune of finding us shortly after graduating OSU with an MBA - and in November of this year will celebrate his one year anniversary as a Project Manager with ProWorks. He has gracefully taken the mantle as our resident morning person, shower philosopher, and person-who-actually-goes-to-the-gym-every-day - frequently imparting bits of wisdom like, "The man who knows something know he knows nothing at all," and, "Don't turn your back on bears, men you have wronged, or a turkey during mating season".

Originally hailing from Pennsylvania, Josh has settled into the lifestyle of the Mid-Valley naturally - his love of Toki Teriyaki and his dream of a few acres to raise goats and chickens on are frequent topics of conversation. Many of our clients will know him as a foreman of ProWorks functions with a cat in his lap - antithetical to, but not unlike, Dr. Evil. Now we just have to find him a local brewery that he likes, and his assimilation will be complete.

When asked what the most meaningful part of our work is to him, he will tell you that being able to deliver for our clients - on time, on budget, and exceeding expectations - is his driving passion. As the person who frequently works with his Excel spreadsheets, I can speak to his meticulous nature - though it's not to be said that working alongside his infectious energy isn't rewarding. Echoing this sentiment, his favorite part of working at ProWorks is our team. He finds the Developers hard working, welcoming, and fun individuals that he genuinely enjoys working with.